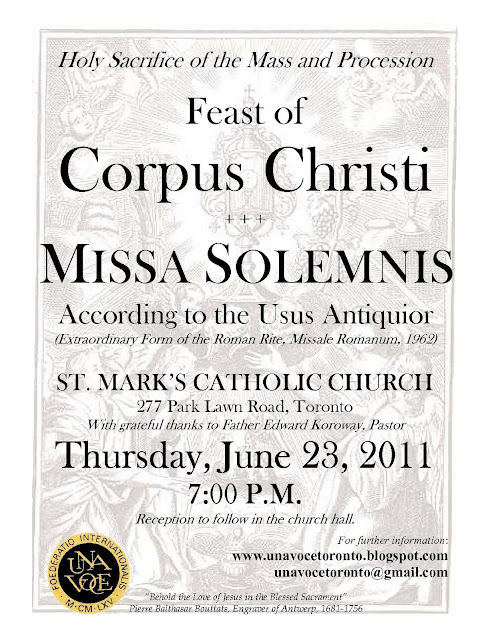 What initially began as a Missa Lecta (Read Mass or Low Mass) under the old indult, it eventually progressed through a simple Missa Cantata now to a Missa Solemnis from after Labour Day to Trinity Sunday every Sunday at 11:30AM.
The parish of St Vincent de Paul is one of two, the other being Holy Family, under the care of the Fathers of the Congregation of the Oratory. You can find more about the Toronto Oratory here.
Posted by Toronto Traditional Mass Society at 5/22/2011 06:36:00 am No comments:

North of Toronto? Traditional Mass is in Schomberg

Nestled on the north shoulder of the Oak Ridges Moraine, Schomberg is a small village located at the north end of King Township at the junction of The King's Highways #9 and #27. Here in this little farming village from the 19th century is a little village church built in a neo-Gothic style and appropriately named in honour of St. Patrick. It was to these villages and farming communities outside Toronto that the Irish were banished from the "Ulster of North America" following the waves of immigrants that survived the fever shed on the lakefront after their long journey to escape the famine in Ireland. 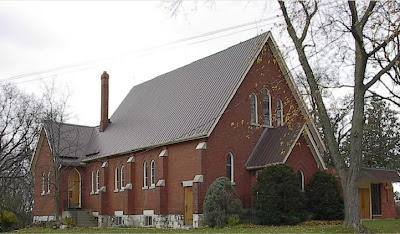 Here, you find the lilt of a travelling Irish priest celebrating the usus antiquior every Sunday at 9:00.
Posted by Toronto Traditional Mass Society at 5/21/2011 09:38:00 pm No comments:

FIUV Statement in Response to the Publication of
Universae Ecclesiae.
The publication of the document Universae Ecclesiae on 13th May 2011 has generated much comment and been the subject of detailed analysis in the media. The International Federation Una Voce would like to present a different perspective on this document which it welcomes enthusiastically. The Una Voce movement started in late 1964, before the end of the Second Vatican Council, to ensure the retention of the age-old Latin language for the celebration of the Holy Mass. National societies were formed and the International Federation Una Voce (FIUV) came into being formally in 1967. In 1970, following the introduction of the Novus Ordo Missae, the emphasis had changed and the members of the Una Voce Federation decided to strive for the preservation of the traditional Roman rite as decreed by the Council Fathers in Sacrosanctum Concilium (Art. 4), the document on the liturgy.
In 1970, Dr Eric de Saventhem, the first President of the FIUV, said that the suppression of the traditional Mass had been achieved de facto only and not de jure. It would be unthinkable, he said, for the older form of Mass to be forbidden as one would have to argue that it had been wrong or bad –either doctrinally or pastorally.
In 1984 the Indult Quattuor Abhunc Annos of Pope John Paul II granted a partial relaxation for the celebration of the traditional Mass which was a small step forward. In 1988 the Indult Ecclesia Dei Adflicta was more generous but the difficulty remained that a bishop’s permission was required and in most instances this was not forthcoming. The situation remained very unsatisfactory – both for priests and laity. When Pope Benedict XVI was elected in 2005 he asked that people pray for him that he may not flee for fear of the wolves. Notwithstanding the great obstacles being faced, the Holy Father promulgated the Motu Proprio Summorum Pontificum in July 2007 and affirmed the right of all priests of the Roman rite to celebrate the traditional Latin Mass, thus confirming the position of the Una Voce Federation since 1970 that the traditional Mass may have been suppressed de facto but not de jure. To their shame, some in the Church refused to accept the will of the Holy Father and the legitimate aspirations of many of the faithful and were determined to undermine this Motu Proprio at every opportunity. It was this negative and obstructive stance that made necessary a subsequent document to clarify certain matters.
Although some have commented that Universae Ecclesiae still leaves some questions unclear, what is perfectly clear is that the Holy Father has fully restored to the universal Church the traditional Roman rite as enshrined in the liturgical books of 1962, that the rubrics in force in 1962 must be strictly observed, and that Latin and the Usus Antiquior must be taught in seminaries where there is a pastoral need. And this pastoral need must be determined by those who wish to benefit from Summorum Pontificum and Universae Ecclesiae, and not be decided by those many in authority whose natural desire is to prevent their implementation.
The International Federation Una Voce has worked patiently and tirelessly for the restoration of the traditional liturgy for more than 40 years and is now witnessing a vindication of its fidelity to Holy Mother Church and the See of Peter. The Federation expresses its thanks, prayers, and admiration to our Holy Father, Pope Benedict XVI, and praises his courage in not fleeing in the face of the wolves. The Federation also extends its thanks and gratitude to the Pontifical Commission Ecclesia Dei, and to those bishops and priests who have also striven, often in great personal difficulty, to preserve and foster the traditional liturgy for this and future generations.
Leo Darroch, President – Foederatio Internationalis Una Voce.
17th May 2011.
Posted by Toronto Traditional Mass Society at 5/18/2011 02:57:00 pm No comments: