Missa Cantata - The Exaltation of the Holy Cross 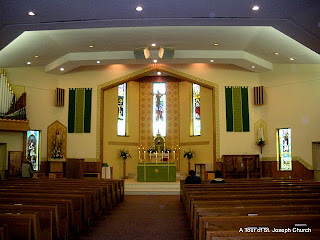 Una Voce Toronto is pleased to announce that a Missa Cantata in the Extraordinary Form of the Roman Rite will be celebrated on September 14, the Exaltation of the Holy Cross. This is the third special Feast Day or former Holy Day of Obligation Usus Antiquior liturgy which we have organised. Over 225 attended St. Mark's on Corpus Christi and almost 400 on the Assumption of the Blessed Virgin Mary at St. Mary Immaculate in Richmond Hill.
Continuing our plan to promote the Extraordianry Form of the Roman Rite across the Archdiocese of Toronto this Mass will be at St. Joseph's Streetsville, in Mississauga. Considering that "Mississauga" was formed as a City in 1968, I think it is safe to say that this is the first time that a public, Missa Cantata according to the liturgical books of 1962, will be celebrated there.
It is also the fourth anniversary of the coming into force of the motu proprio Summorum Pontificum which has made all this possible and to give thanks to God for this grace, the "Te Deum" will be sung following the Mass.
Una Voce Toronto will make available for "sale' the red missalettes to assist with the Ordianry of the Mass for $5.00. We will no longer "loan" these out for the Mass as they are not being returned. A translation aid will be available for the Proper of the Mass. However, we encourage you to purchase a Roman Missal which can be easily found at the book stall on Sundays at The Oratory at either St. Vincent de Paul or Holy Family. As well you can find the "Baronius" Missal on lne which we highly recommend.
Posted by Toronto Traditional Mass Society at 8/21/2011 07:56:00 am No comments:

Over the last few months, Una Voce Toronto has been promoting and organizing the holy Mass on specific feast days in the Extraordinary Form of the Roman Rite in Toronto.

On Corpus Christi at St. Mark's over 225 attended a Missa Solemnis and a few evenings ago on the Feast of the Assumption of the Blessed Virgin Mary over 375 attended the Missa Cantata.

With the direction of the Board of Una Voce Toronto, Vox is forming the Una Voce Toronto Choir to be available for various Masses which we sponsor over the course of the year.

Choir practices will be every Tuesday beginning September 13 at St. Cyril's Catholic School on Kempford Avenue one block south of Finch Avenue west off of Yonge Street. The school is just in from the corner of Yonge and Kempford Avenue. It is a short walk from the Finch Subway on the TTC and from York Region at Finch Station. There is parking in the school parking lot off of Kempford.

The first practice will include the work to be sung the next evening at St. Joseph's in Mississauga. As this is the first the program will be confined to what is expected to be known and can be sung by the congregation Mass VIII, Missa de Angelis and Credo III as well as Lift High the Cross as a recessional hymn.

Men who have some knowledge reading Gregorian notation or a desire to learn to sing the Proper of the Mass are must welcome.

Missa Cantata - Feast of the Assumption of the Blessed Virgin Mary

Please join us on Monday, August 15, 2011 for the Holy Mass in honour of the Assumption of the Blessed Virgin Mary at St. Mary Immaculate, Richmond Hill at 7:30PM.
We are also in planning for September 14, Feast of the Holy Cross and Thanksgiving to Pope Benedict XVI for Summorum Pontfiicum in Mississauga and a Missa Solemnis for the Feast of All Saints in Etobicoke.
Missa Solemnis for the Patronal Feast of the Immaculate Conception of Blessed Virgin Mary at St. Mary Immaculate in Richmond Hill. 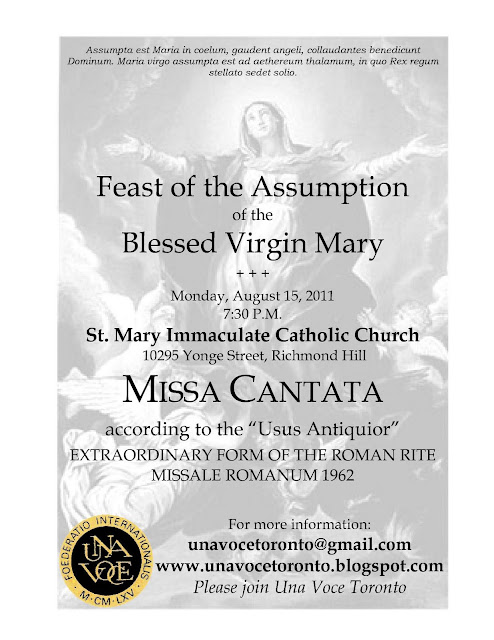