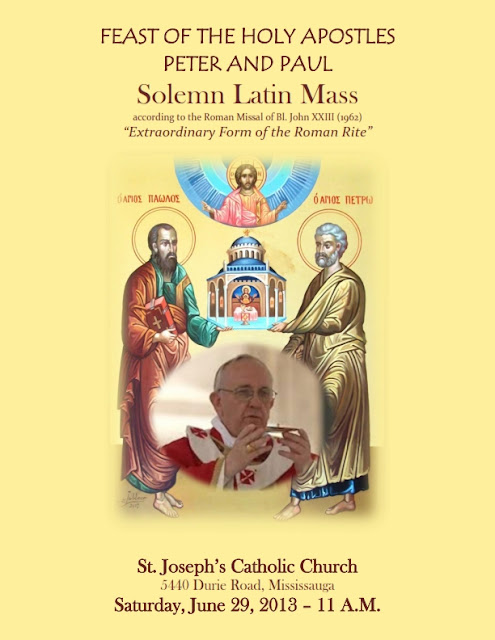 At the wonderful parish of St. Joseph located at 5440 Durie Street in Mississauga, where the Pastor, Father Marc-Andre Campbell and the Associate Pastor, Father Kim D'Souza are implementing a liturgical praxis in full keeping with the vision of Benedict XVI; a Missa Solemnis will be celebrated in honour of the Holy Trinity on this Feast of the Holy Apostles Peter & Paul. Without a doubt, under Ana Maria Nunes, the choir at St. Joseph's is the best and most liturgically formed in Mississauga. Twice, the Toronto Traditional Mass Society has provided active support to this parish on Holy Cross 2011 and Immaculate Conception 2012 and most recently in a consultative role on Corpus Christi last. It is more than marvelous to now see the parish take the lead on the Feast of the Holy Apostles Peter & Paul with a Solemn Mass in the Extraordinary Form of the Roman Rite.

If you are in the Toronto to Hamilton, Kitchener, Oakville, Burlington, Milton, Brampton or Orangeville areas you are no more than a one-hour drive on a Saturday morning. Come to the Mass and fill the Church as we pray for our Holy Father Francis for whose intentions this Mass is being offered.
Posted by Toronto Traditional Mass Society at 6/20/2013 10:44:00 am No comments:

The magificent liturgy was held at the beautiful St. Patrick's Kinkora in the Diocese of London in Ontario where the Mass in the EF will be moving from to the City of London in July 2013. The Mass was celebrated by Father Paul Nicholson, Pastor and Priest for the Solemn Liturgy. Father Kim D'Souza, Associate Pastor at St. Joseph's Mississauga (Streetsville) was Deacon and Mr. Stephen Bruzzese, Seminarian from the Diocese of St. Catharine's Ontario was Subdeacon. Mr. Joseph DeCaria was Master of Ceremonies, Mr. Steven Eckert, MCII aided by five Clerks. The music was provided by Ensemble Sine Nomine of Kitchener under the direction of Mr. Stephen Strauss with Angela Straus, Organist

The music included St. Anthony's Chorale based on a Theme of Haydn's by Brahms during the liturgical procession. The congregation and choir then sang the Veni Creator Spiritus prior to the Nuptial Rite. Mass began with the Gregorian Introit and all the Gregorian Propers from the Liber Usualis. The Ordinary of the Mass -- Kyrie, Gloria, Credo, Sanctus, Benedictus and Agnus Dei was the Mass for Five Voices by William Byrd. After the Offertory Antiphon was sung the sublime Ave Maria by Robert Parsons followed and Byrd's Ave Verum Corpus was sung after the Communion Antiphon and Psalm at Holy Communion. All sang the Salve Regina which was followed by the presentation of the Bride's bouquet at the Altar of Our Lady whilst the Ave Maria by the Rt. Rev. John Edward Ronan, founder of St. Michael's Choir School, Toronto was sung with choir and organ. The recessional was La Rejouissance from the Royal Fireworks by Handel. 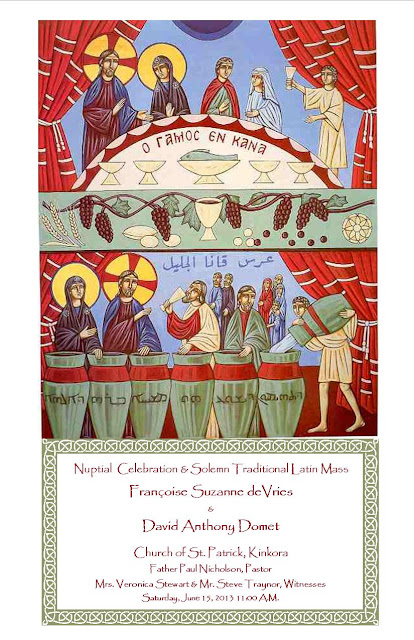 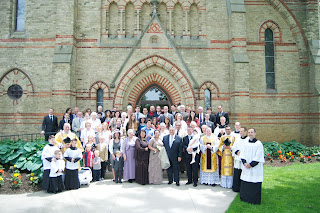