FIRST TRADITIONAL LATIN MASS IN BARRIE IN OVER 50 YEARS! 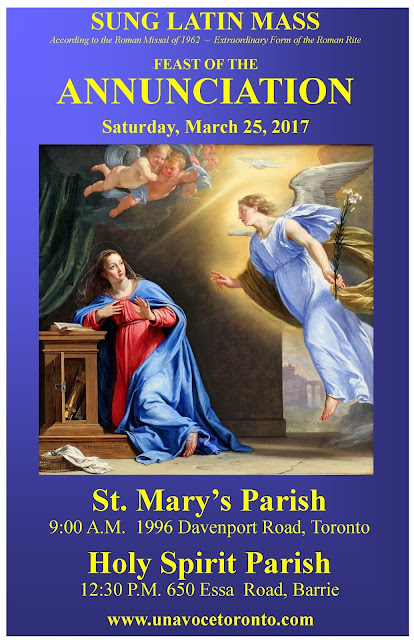 Rubrics for the singing of the Traditional Latin Mass

Let us review some terms and basic rubrics for the Traditional Latin Mass, also known in modernist terms as the Extraordinary Form of the Roman Rite. There is charity in truth and there is peace and unity in truth. There is no charity in silence and appeasement.

Commonly referred to as “Low” Mass, the Mass is more properly referred to as a “Read Mass.” This comes from its Latin name, Missa Lecta. The Mass, in history, would have always been Solemn (see below), but as parishes and villages developed away from monasteries and cathedrals; and as mendicant Orders journeyed to preach, priests would desire to offer the Holy Sacrifice for themselves and the souls they found on their journeys. The Missa Lecta was developed for this purpose. It is a quiet and contemplative Mass with one server only, though two can be “tolerated.” The Mass is entirely in Latin, though, in accord with the legitimate Law as prescribed by Pope Benedict XVI, in Universae Ecclesiae the Lesson(s), Epistle and Gospel may be said in the vernacular from an approved translation at the time (1962) from the Altar without first being read in Latin. There is normally no music permitted.

Music is not permitted in a Read Mass except in specific circumstances. In fact, a more proper word than permitted would be tolerated, in its classic sense. One may have an organ prelude or postlude and organ music at the Offertory or during Communion in those times of the year where organ music is not prohibited. No solo organ music is permitted in the Mass during Advent, except on Gaudete Sunday or in the season of Lent on Laetare Sunday. No solo organ music is permitted under anytime at a Requiem Mass. Organ music may be used at a Requiem Mass only to support the singing and only if absolutely necessary to even do that. Music or, hymn sinning may be used at a Read Mass in the following manner. A hymn may be sung as a processional and the recessional and these may be in the vernacular. A Latin hymn may be sung at the Offertory and the Communion but it may not be the text of the Proper of the Mass which must be read by the priest aloud and heard by the faithful in attendance. A hymn may be sung in the vernacular at the Offertory and Communion provided it is connected with the liturgical action. For example, the Offertory hymn could be, “See Us Lord, About Your Altar,” or, “Lord, Accept the Gifts We Offer.” At Communion, the hymn, if in the vernacular, must be a hymn to the Blessed Sacrament or be a hymn of Thanksgiving.  The Gloria and Credo cannot be sung at a Read Mass.  A Kyrie, Sanctus and Agnus Dei may be sung if it is short, for example, Mass XVI or Mass XVIII, never Mass IX per se. All singing must conclude so that the action of the Priest is not delayed and the audible texts are not covered by music. The Priest does not sing the Collect or Postcommunion nor any other oration, nor does he chant in any way the salutations, nor do the people respond in chant. These are only said.

The musical rubrics apply to a Requiem Mass as to the degree above.

Holy Mother Church has determined the above rubrics in order to ensure the proper dignity of the Mass. When we work within the Laws of the Church, there is peace and understanding and serene contemplation of the holy actions taking place before us.

When we deviate from these for pastoral or other reasons or through pressure, we create confusion and disunity and distress and these are not from the Holy Spirit; we insert our own desired into the liturgy, where it does not belong. None of us are masters of the Liturgy of God, we are the servants. We must do our work in truth and humility, we must submit to the mind of the Church and we must reject any inculturation and pastoral provision that deviates from the truth.

At no time is a guitar permitted during a Traditional Latin Mass.

There is no evidence that Fr. Franz Gruber, S.J. ever permitted Stille Nacht on guitar at a Midnight Mass due to a broken organ. This is “fake news.”

At no time is it permitted to sing anything in the vernacular in a Sung or Solemn Mass. Any reference to what occurred between the great wars in Europe in Germany, Belgium or Holland should be understood in the context of dissent and diabolical disorientation that lead to the complete upheaval of the holy liturgy.

Lest one doubt the above. Be assured that every educated Catholic in proper Church music and liturgy according to its venerable tradition is aware of these rubrics and knows where to find the sources. Let those who labour for the love of true worship of the LORD in the timeless liturgy understand the need to maintain consistency, peace and serenity in the work before us. This peace and serenity can only be achieved if we work within that which we are given. By humbling ourselves to the timelessness, we will achieve peace in our work. It is when deviations occur that we bring disunity and cognitive dissonance to the holy work before us.

Email ThisBlogThis!Share to TwitterShare to FacebookShare to Pinterest
Labels: Catechesis

Solemn Mass for the Feast of St. Joseph 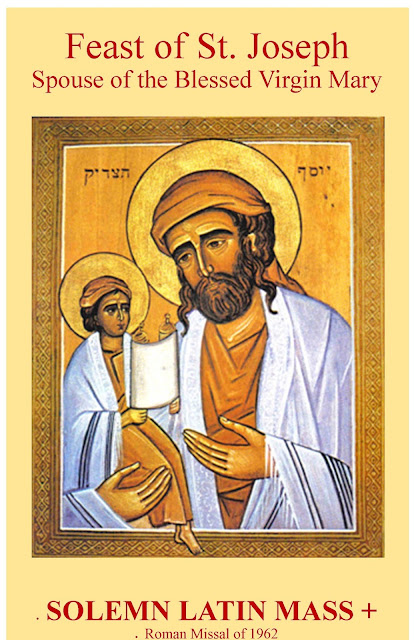