We are so grateful that on All Saints Day and All Souls Day the Toronto Traditional Mass Society was able to welcome so many for the two Solemn Masses. Much thanks is to be given to the priests, deacons, seminarians, servers and choir members for all of their faithful work and commitment.

We are happy to announce the following Masses:

Saturday, February 2, 2013 at 10:00 A.M.
Solemn Candlemas
Feast of the Purification of the Blessed Virgin Mary & Presentation of the LORD
St. Patrick's Church
Kinkora

Also, please note that the Toronto Oratory has now changed its Sunday schedule beginning next Sunday, the First Sunday of Advent 2012. With Epiphany falling in 2013 on a Sunday, the TTMS will not be organizing a Mass and reminds you of the following regular diocesan parishes offering the Extraordinary Form of the Roman Rite every Sunday.

Email ThisBlogThis!Share to TwitterShare to FacebookShare to Pinterest
Labels: From the Board

Catafalque Candles for the Requiem Mass

My friend over at The Spirit's Sword has a little hobby. In preparing for the Solemn Requiem Mass at St. Isaac Jogues in Pickering, it was necessary to obtain catafalque candles for the Prayer at the Catafalque.

In the new Rite of the Mass, the Paschal Candle is lit at the head of the coffin. In the traditional Latin Rite, the Extraordinary Form of the Roman Rite, this is not the case. The coffin on the catafalque or "trolly" if you will, is surrounded by six candles and the coffin is covered in a black pall, not white. While every church had these prior to the liturgical reforms they cannot be found today. To be sure, one could use floor mounted candles which are often used around the versus-populum altar but they are generally too fancy. These candles should be rather subdued. As well, the candles themselves should be unbleached and 100% beeswax.

My friend over at The Sprit's Sword has a little hobby; well, he obtained his first commission and he did a fine job. Here is the story reprinted from his blog, with permission:


What I've been up to lately.

I spent much of my spare time in the month of October building these. 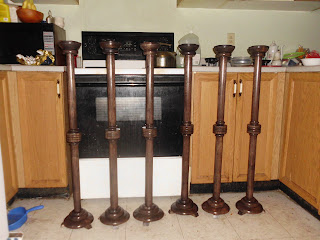 Catafalque candles, used in funerals in the extraordinary form Mass.

I was e-mailed by a friend who wished to purchase some for the EF All Souls Mass around the end of September.  A quick web search turned up a design that was acceptable, and I made a prototype out of scraps I had lying around the garage.  The friend suggested a  possible colour scheme which I tried out... 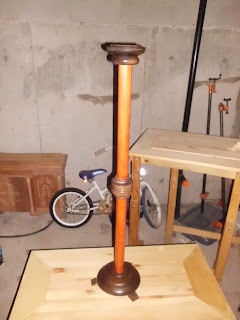 ..and which was quickly rejected.  We decided to go with the dark colour, with the sticks made out of oak. The buyer wanted the wood to be all new, so I went to the local lumber yard (a Home Depot, sadly.  All the good lumber yards I used to know when I bought wood regularly have all closed down)  and priced out some wood, sent him an estimate, to which he agreed.   I started buying wood and gluing it into blanks big enough for the candlesticks.

Around this time, I mentioned to a co-worker that I had this commission, and he offered me the use of his duplicating attachment for the lathe.  That would make everything so easy and just perfect.  I wrote to the buyer and told him that it looked like everything was just hunky dory, and there should be few problems from here on in.

The co-worker wrote to me to tell me that his garage is such a mess that he couldn't get into it enough to find the duplicator.  I wrote back to him thanking him for the offer of help, and telling him I would send over the crew from Hoarders posthaste.  Inside I was a little annoyed.  I would have to freehand the whole thing.

I began by setting up a couple of storysticks.  A storystick is basically a stick with the measurements laid out on it.  I hold it up against the piece on which I am working, and take the measurements off it, rather than, say, using a measuring tape every time.  It is more useful than a measuring tape, as it is more stable, and, if a mistake has been made in the measuring on the stick, it will be a consistent mistake- and in making six identical as possible candlesticks, consistency is more important than accuracy.  With a measuring tape, there would b a chance of a random error creeping in to my measurements on every individual piece.  I also set my calipers, sharpened my turning tools (since I was working in oak, I would be doing a lot of sharpening over the course of this project) mounted the wood, and fired up the lathe.

I turned the main blank round, and transferred the marks from the stick onto the blank.  The only real problem now would be variations about the thickness of a pencil line.  A pencil line is about a thirty second of an inch wide, depending on sharpness etc.  A deviation about the thickness of a pencil line is not too much of a problem, as it tends to be offset by other deviations.  What that means in practical terms is that if you are off- say, too short- by a pencil line thickness for one detail, you are just as likely to be off in the other direction- say, too long- for the next one, and the two deviations will cancel each other out.

Sometimes the deviations line up in the same direction.  So if you make four lines, and are off the thickness of the line the same way each time, the error accumulates and instead of cancelling each other out, you will ultimately be off by an eighth of an inch, which is a much greater variation than it sounds.  At least for the maker, of which I will say more later.

This problem really appeared after the turning was all done and I began to glue up the candlesticks.  Two were the same size; the other four were off by an eighth of an inch or more.  I cut them apart, reglued them.  The four were now correct.  The other two were off, so I sawed them apart, etc.  I also noticed that one of the top pieces was unacceptably off.  I glued up another blank, and made a better one.  Next I had to make sure they all stood up straight.

The floors in my house are not level.  Unless I can find a flat patch in the house, I cannot true up the sticks.  I find a flat patch in the kitchen, so, huzzah, but then I realize that, with all the adjusting I had done trying to get them to stand up straight in the living room, I had more or less ruined the feet.  So, remove feet, and put on a new set.  A very small amount of adjustments later, and everything is hunky dory.  The sticks were now ready for finishing.

The finishing process actually went quickly and smoothly.  Three applications of stain (I used a water based aniline dye, dark walnut colour.  One of my gloves leaked, and the dye soaked into my skin, and it was impossible to get off.  My hand was dark brown for over a week until the skin die and flaked off.) and another five of varnish. Apply thin coats, sand in between, and voila, the job is finished.  Call up the buyer.

This is mainly psychological.  As a builder, I know every flaw and misstep in my work.  To me, it stands out like a sore thumb, and I see the flaws every time I look at my work.  No one else ever sees it, but I do, and it makes me a little paranoid sometimes.  I find myself thinking, he'll see it.  He'll hate it.  He won't pay. I don't blame him.

But it was all for nothing.  The buyer came, loved them, and picked them up.  He even sent me a photo from the All Souls Day Mass. 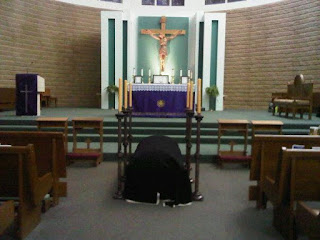 Not bad, even if I do say so myself.

Now, back to the Christmas Bazaar stuff, and the home altar, and the medieval clock, and the hope chests, and the desk, and....

As has become our custom, the day begins with the Holy Mass, this year, a Missa Cantata for Our Lady's Saturday after Pentecost followed by a wonderful brunch. Our Guest Speaker, Mr. Damian Goddard was our guest speaker and spoke from his heart about his love for Christ and His Church and his conviction to the truth. We provided our Treasurer's Report and President's Report. The Constitution of the Society was significantly amended. Those of the existing Board were re-elected and new Directors were added for a total of nine. All votes were unanimous; note, there was not one dissenting vote!

The fact that the votes were unanimous is a great blessing. The meeting was the largest attended ever since the founding of the Society and there were more paid-up members at the date of the AGM than at any other time in our history.

Our liturgical assets continue to grow and now include:

Our plans for the next year include a Solemn Mass on the each traditional Holy Day of Obligation and other First Class Feasts. We are planning a conference on the Usus Antiquior a major fundraising dinner and collaboration with those who are prepared to move forward in faith, harmony and fraternity.

Friends, your membership in the Society is needed. You can join as a Single Member for only $20. A family membership is $30 and includes both spouses and children who have received the Sacrament of Confirmation and are under eighteen years. We are federally registered charity and your contributions of $100 or more less the membership amount, will be receipted for tax-deduction purposes. Your contribution helps the Society to gather necessary liturgical items, promote the Holy Mass according to its traditional rite and provides support for Seminarians from the Archdiocese of Toronto. Won't you help us in this regard?

You can email us at:

You can visit our soon to be upgraded web page and our future paypal button at:

or you can write us at:

May God grant us all His pardon and peace,

Email ThisBlogThis!Share to TwitterShare to FacebookShare to Pinterest
Labels: From the Board
Newer Posts Older Posts Home
Subscribe to: Posts (Atom)