The Subdeacon - there is no "Straw"

The question of the qualifications for the Subdeacon in a Solemn Mass continue to be raised and the need for clarity is important. Some are very confused, there is no need to be.

The Subdeacon was abolished along with the minor orders of Porter and Exorcist by Paul VI. The Lector and Acolyte were retained and part of the process of seminarian development on the journey to the priesthood. The clerical state does not formally begin until the Diaconate. The vision of Paul VI was that since the Subdeacon was not formally the clerical ordained state, it was still, technically speaking, a layperson. A seminarian is still today, a layman until diaconal ordination. Paul VI left open the possibility, and perhaps hope, that lay people would be formally "instituted" as Lectors and Acolytes for parish life. This has happened in the Diocese of Lincoln and as far as we can tell, nowhere else.

During the period of the traditional Mass growth under the old "indults" of Pope John Paul II, the Subdeacon was not a particular pressing issue. The Mass was generally celebrated as a Read, or Low Mass and sometimes sung. This is particularly true outside the Priestly Fraternity of St. Peter and even in their case, outside their seminary or large parishes, they would not have generally offered Solemn Mass.

Let us be clear, the Mass should always be Solemn, the Sung Mass and Read Mass came about as exceptions. A decade now after Summorum Pontificum we've seen much growth of the traditional Mass and the desire for people to have Solemn Mass.

Now here is where we get into a problem and what can be called a creeping modernism by those influenced by the ever changing liturgical dynamic of most parishes and the options of the revised modernist Roman Missal.

After 1962, an option was created for a "semi-solemn" Mass with a deacon undertaking the sub deacon responsibilities. There also began, after 1965, an abhorrent thing called a "straw" Subdeacon, a layman, without maniple and with some other changes, serving as such. After Summorum Pontificum, this practice began to take hold again.

After questions, the Congregation for the Discipline of the Sacraments issued a statement that those men "clothed" in seminary, could fulfil the duties. This was fairly and legitimately given broad interpretation. What did "clothed" mean? For a short period of time then, it was tolerated for a seminarian to serve as Subdeacon.

In 2013, a formal instruction was issued prohibiting this. The Subdeacon, could be in seminary or theoretically, could be a married man with a family, but he must be a formally Instituted Lector and an Instituted Acolyte.

It behooves everyone associated with working toward liturgical restoration and involvement in the traditional Latin Mass to follow what is expected. The great danger is for incrementalism or "gradualism" and the "novus ordo mentality" to take hold within the traditional Latin Mass. It must be resisted and rebuked at every turn whether globally with the suggestion of the new lectionary supplanting the traditional to the local level and parishes or groups of people who associate together for the purpose of organising a Mass.

There is no such thing as a "straw Subdeacon." It does not exist, those who insist it does and that any layman, including a seminarian not formally instituted are wrong.

If it is not possible to properly offer a Solemn Mass in accord with the rubrics and norms it should simply not be done and a Sung Mass should be done it its place.

There is a duty of those who purport to be authorities or put themselves forward as having some depth of knowledge and authority over the liturgy and to instruct with clarity and truth.

Questions on this matter can be directed to unavocetoronto@gmail.com 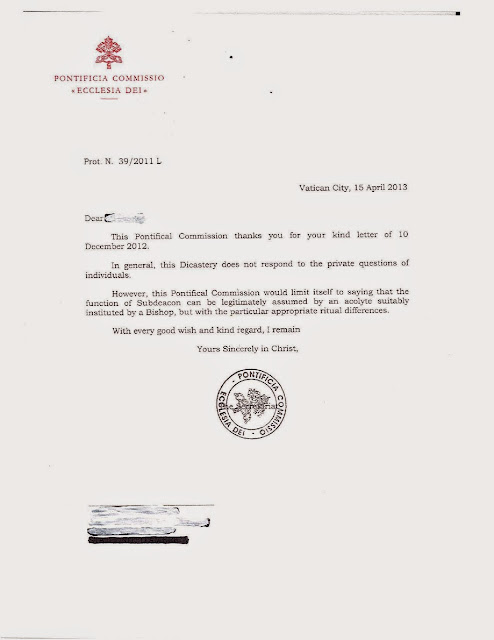 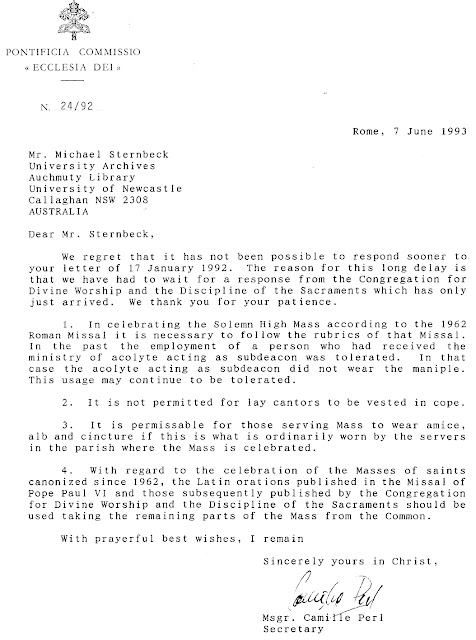